Image Segmentation plays a significant role in the field of image analyzing. To obtain accurate segmentation results, several methods have been proposed, like clustering methods, graph-based methods and learning-based methods et al. In this post, a different model is introduced, named Active Contour Model, which segments input image by evolving a smooth curve (active contour) iteratively. Relevant code can be found at the end of this page.

Note: if you have trouble seeing the following mathematical formulas and figures, try refreshing this page. If the error persists, please let me know via email.

1. What is Active Contour Model

Active Contour Model (ACM) is an iterative model for image segmentation, whose basic idea is that the object boundary is represented as a close and smooth curve (active contour), can be obtained by evolving an initial curve under the guidance of the input image information. 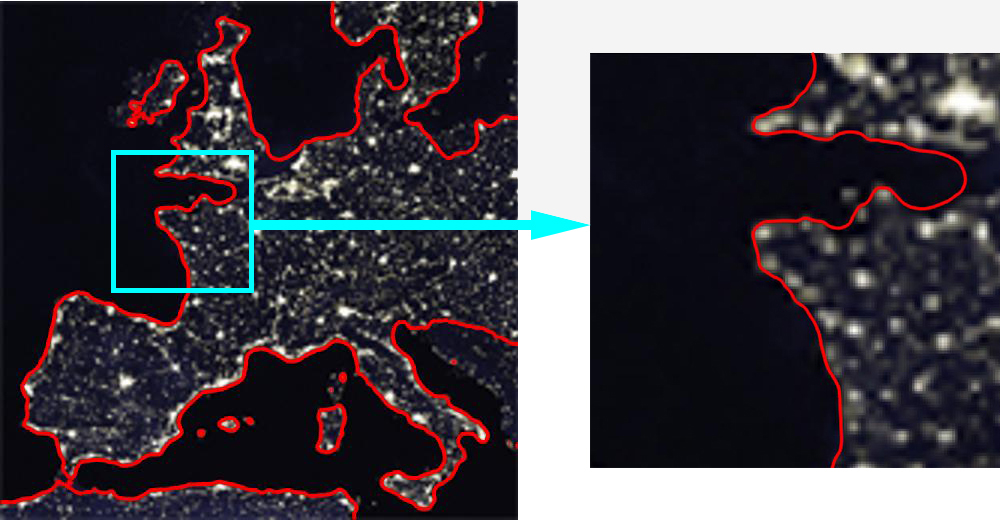 The figure above illustrates how active contour model works by taking an example of segmenting the image of Europe night-lights. It can be seen that after several iterations, the object in the given image is enclosed by the closed and smooth curve.

Compared with other segmentation models, there are two main advantages ACMs have:

In practice, there are few edge-based models that can achieve desired segmentation results, because of the presence of image noise and discontinuous boundaries with strong gradients in real scene. Thus region-based models have been widely studied so far. Here the region-based model is demonstrated by giving an example of a well-known and typical segmentation mehtod: Chan-Vese Model.

Before discussing the concrete form of Chan-Vese Model, we define subset $\Omega \subset {\mathbb{R}^2}$ as the image field, ${u_0}:\Omega \to \mathbb{R}$ as the given image. Let $C$ in $\Omega$ express the evolving curve, as the boundary of the open subset $\omega \subset \Omega$, and thus we can defind the region $inside(C)$ and $outside(C)$ as $\omega$ and $\Omega \backslash \omega$ respectively. 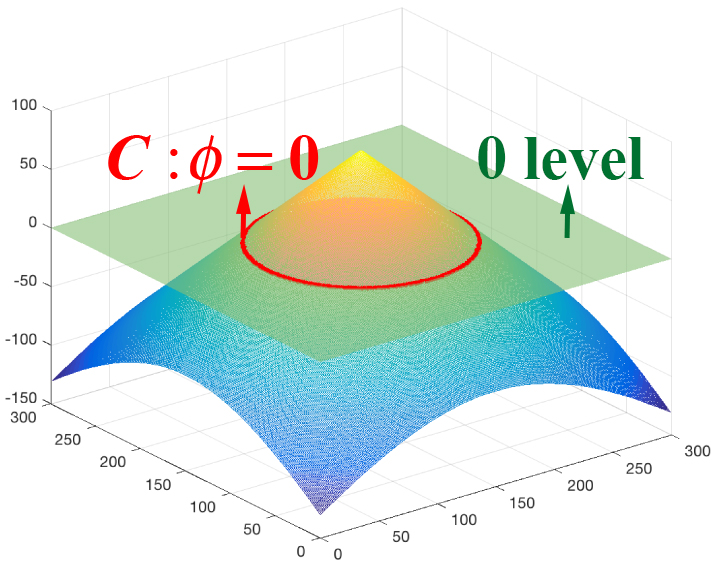 Figure 2. The example of the level set method. Left: The implicit representation of $C$ (red circle) on domain $\Omega$, which is divided into 2 regions according to $\phi$; Right: The 3D visualization of corresponding level set function $\phi$.

The code of this model is provided HERE. In traditional Chan-Vese model, to prevent $\phi$ from losing its nature as a SDF during the minimization process, a re-initialization is needed. This process, however, is time-consuming and in turn to decrease the segmentation efficiency. To cope with this problem, I made some improvements to the iteration process by integrating an additional term proposed by Chunming Li et al. [2]: $$ \mathcal {P}(\phi ) = \int_\Omega {\frac{1}{2}{ {(|\nabla \phi (x,y)| - 1)}^2}dxdy} $$

From the term above, it is clear that the point that its gradient is larger than 1 will be penalized during the evolution process. Thus the subsequent re-initialization can be eliminated.

Note: To use it as academic purpose, please cite the following papers: